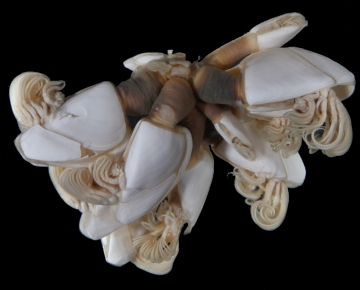 You might not expect a botanist to have strong feelings about the collections in the Zoology Museum, but I’ve always believed that a good biologist doesn’t let a little matter of kingdom stand in the way of studying interesting organisms. I have 2 particular favourites that I like to visit from time to time. On the stairs, the kakapo (Strigops habroptila, or owl parrot) is something of an old friend. This New Zealand flightless parrot is critically endangered in the wild, prey to invasive predatory mammals such as cats and rats. As an undergraduate student at the University of St. Andrews I used to eat my sandwiches at lunchtime in the Bell Pettigrew Museum (their equivalent of our Zoology Museum), and I had a favourite spot next to the kakapo. When I moved to Cambridge I was really glad to find another specimen of my old friend here!

My other favourite is the display of barnacles. People don’t often think about barnacles – certainly I never had until I saw my first real live ones under a microscope on a field trip, for our first year Evolution and Behaviour class, that I was leading along with John Flowerdew from the Zoology Department. Barnacles look at first glance like just another gastropod mollusc, sitting on a rock under a shell. But in reality they are arthropods, members of the same class (the crustaceans) as crabs and lobsters. They have adopted a very specialist lifestyle, glueing their bodies to the rock at the head end, secreting calcareous plates around their body for defence, and waving their legs through the hole in the top of the shell to catch small particles of food in the water. The barnacle display in the museum showcases all this perfectly, with some closed up specimens of the very common acorn barnacle on a rock, a drawing showing how the animal looks magnified, and an especially clever display of the goose barnacle with the shell removed to display the animal inside. Barnacles always remind me that by thinking about the plants and animals around us from a fresh perspective we can develop some fantastic insights into the natural world.