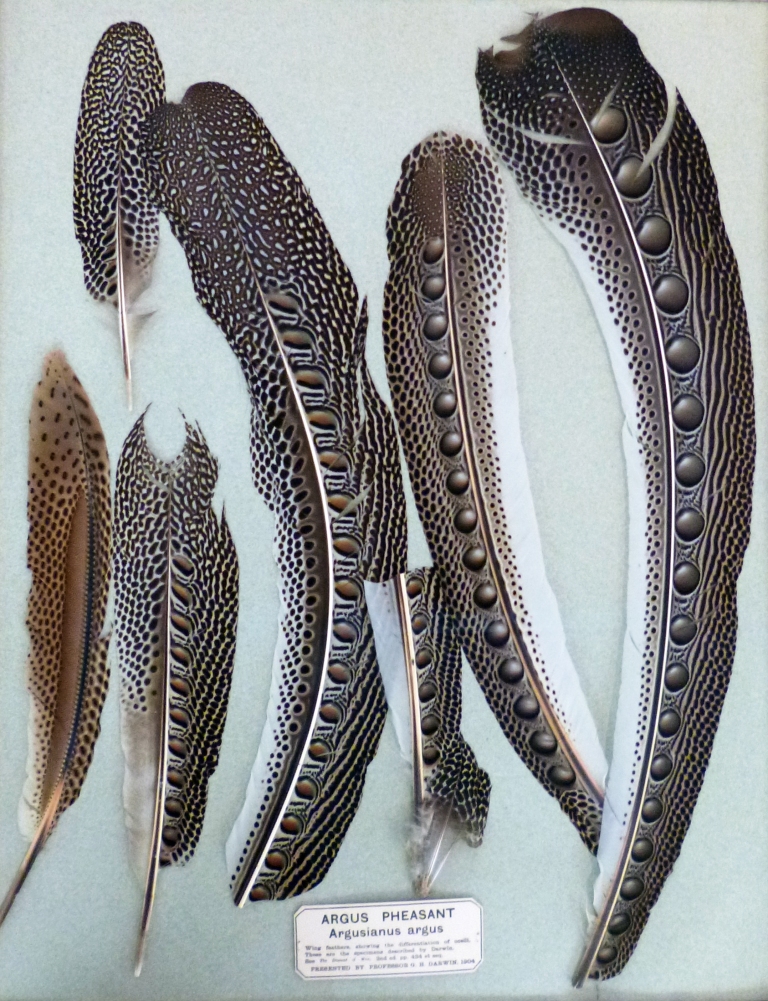 In a display case surrounded by the beautiful, the colourful and the peculiar of the bird world, mounted in a frame is a selection of feathers from a male Argus Pheasant (Argusianus argus). Unlike the shimmering green-blue of a Peacock’s tail, the beauty of the Argus Pheasant is a little more subtle. A dappled pattern of browns and beiges with highlights of off white and, on the larger feathers, a series of large spots perfectly shaded to appear three dimensional. These feathers are not just any Argus Pheasant feathers, but are from the feather collection of one Charles Darwin.

Darwin greatly admired the plumage of the male Argus Pheasant, as his description in his book “The Descent of Man” shows:

“The immensely developed secondary wing-feathers, which are confined to the male, are ornamented with a row of from twenty to twenty-three ocelli, each above an inch in diameter. The feathers are also elegantly marked with oblique dark stripes and rows of spots, like those on the skin of a tiger and leopard combined. The ocelli are so beautifully shaded that, as the Duke of Argyll remarks, they stand out like a ball lying loosely within a socket.”

These markings he described as more striking in the pose taken by the male while displaying to the female, where the feathers form a “grand, semi-circular upright fan”. These descriptions form evidence for Darwin’s ideas on sexual selection – the preference of females for mates with particular characteristics like the elaborate wing feathers and displays of the Argus Pheasant, and so driving the evolution of these traits (referred to as secondary sexual characteristics). Although you could be forgiven watching a video of a male Argus Pheasant like this one (from Arkive.org)

and thinking that it just makes the male look like a bit of a show off and the female is not at all impressed!

These feathers from Darwin’s feather collection are just one of the many treasures held by the Museum. Seeing something that Darwin saw, and reading his observations brings his work so much closer, a real proximity with the great man himself despite the many years between us. Spending time with specimens like these make coming into work at the Museum so exciting, and we want to share that with as many people as we can!

The Museum is going through a major redevelopment, but we need your help. Check out our website:

for information about our plans for the Museum. If you would like to help us to make it possible for more people to explore the wonders of the animal kingdom and experience a connection with great scientists from the past and today, please go to the University’s online giving page:

Any donation, however small, will help us to care for our fabulous collections, and display and interpret them in exciting new ways for audiences of all ages and backgrounds.

Thank you, and we hope to welcome you to a wonderful new Museum in 2016!